New law cracks down on those annoying and polluting leaf blowers, but can more be done? 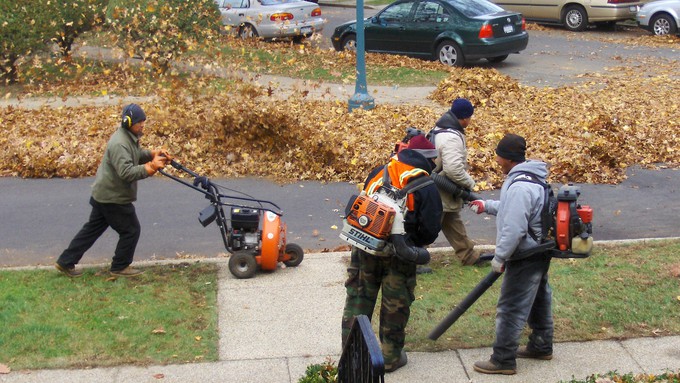 Despite a new law, leaf blowers may not be going away anytime soon. Peter Dutton / Wikimedia Commons   C.C. 2.0 Generic License

Stroll through almost any residential neighborhood in California, and you’re likely to have your reverie disrupted by one of the most common, least loved sounds of suburbia—the roar of a leaf blower. A garden rake is silent, but the gasoline-powered leaf blower, which serves essentially the same function, generates an earsplitting noise of up to 112 decibels as it blasts fallen leaves from front yards into streets.

That’s louder than the amplification in the front row of a typical rock concert, which comes in around 110 decibels, and is considerably louder than the 85 decibels at which sound can cause permanent hearing damage with prolonged periods of exposure, according to the American Speech-Language-Hearing Association.

On Oct. 8, Gov. Gavin Newsom took what appeared to be a step toward reducing the dangers not only of leaf blowers but of any machine powered by a “small off-road engine,” that is, a gas-powered engine with under 25 horsepower. In addition to leaf blowers, SOREs (as they are known) are also the engines powering chain saws, lawnmowers,  weed whackers, electrical generators, and other small machines.

Newsom signed legislation, Assembly Bill Number 1346, which had earlier been passed by the Assembly 47-22, and by the state Senate, 21-9. But though the bill has been described as a “ban” on leaf blowers and other SORE-powered equipment, Californians should not expect their neighborhoods to suddenly quiet down—and become less polluted—anytime soon.

The legislation does, however, make California the first state to place any kind of a ban on small, gas-powered devices. But individual municipalities in the state have been outlawing leaf blowers and similar machinery for decades. The Marin County city of Belvedere way back in 1987 made it “unlawful for any person within the city limits to operate any portable machine powered with a gasoline engine used to blow leaves, dirt and other debris off sidewalks, driveways, lawns or other surfaces.”

But Carmel, in Monterey County, had taken similar measures more than a decade earlier, with a 1975 ban on “operation of a combustion engine blower” used to “blow materials” around any public or private property, and the upscale Los Angeles County community of Beverly Hills passed a similar ordinance in 1976. The beachside L.A. County city of Santa Monica banned leaf blowers within its city limits starting in 1991.

In the Bay Area, Los Altos came up with an anti-leaf-blower law in 1991, followed by Menlo Park in 1998 and Palo Alto in 2005. All in all, about 60 cities in California have some form of ban on gasoline-driven gardening tools in place.

The local bans were primarily aimed at cutting down on the noise pollution generated by leaf blowers and other SORE-powered devices. The new state legislation is all about air pollution. According to the state Air Resources Board, there are about 16.5 million small engine devices in California, compared to 13.7 million “light duty” cars.

Because cars are becoming cleaner to operate every year, thanks to continually updated federal and state regulations, at some point this decade, the board says, polluting emissions from SOREs will surpass the amount of smog spewed out by passenger automobiles, and by 2031 small-engine machines will cause twice as much pollution as passenger cars. State rules governing SORE pollution have not been significantly revised since they were first set down in 1990.

Leaf blowers and similar devices pour such a large quantity of harmful gases into the atmosphere that you’d have to drive a Toyota Camry from Los Angeles to Denver—approximately 1,100 miles—to create as much pollution as a commercial leaf blower generates in just a single hour of use.

The new law signed by Newsom will not come close to improving that dangerous situation overnight, or even over the next several years. The bill does nothing to curtail leaf blowers already being used by landscaping businesses, and by people using the less powerful, residential versions on their own property.

The new law simply bans sales of new gas-driven leaf blowers and other SORE-powered items starting on Jan. 1, 2024. By that same date, any new such machinery must meet zero-emissions standards—meaning it would need to be electric rather than gasoline-powered.

Electric leaf blowers are not quite pollution free, however. The powerful air streams they generate still blow all sorts of debris, ranging from dust and loose dirt to animal feces, into the air where humans can inhale it. Battery-powered blowers also come with the problem of how to get rid of the batteries. Improperly disposed batteries can end up in landfills, where they eventually break down, their toxic and corrosive chemicals leaching into the ground, and as a result into groundwater which can be consumed by humans.

Recycling used batteries is obviously better for the environment, and the people in it, than dumping them into landfills. But recycling of lead batteries, which are found in some leaf blowers and other electrical gardening equipment, emits lead into the atmosphere. Lead battery recycling often takes place in low-income countries, at recycling plants situated in urban neighborhoods.

Lithium-ion batteries, which are more commonly used in electrical gardening equipment and well as electric cars, contain much lower amounts of toxic material and are classified as non-hazardous waste. But manufacturing those batteries generates huge quantities of carbon dioxide.

The requirement to go all-electric has drawn objections from the National Association of Landscape Professionals, the trade group that represents approximately 50,000 landscaping businesses in California—businesses that will now face suddenly increased equipment expenses. NALP Vice President Andrew Bray told the Los Angeles Times that electrically powered riding lawn mowers can cost twice as much as the gas-driven kind, which already run between $7,000 and $11,000 per mower.

Bray also told the Times that a typical three-person landscaping crew would need to go through between 30 and 40 batteries, which they would need to carry with them, just to put in a full day’s work using electrical landscaping tools.

Even the January 2024 deadline comes with a loophole. If the Air Resources Board determines conversion to zero-emissions equipment is not “feasible” by the start of 2024, it can push the deadline back as long as it takes. The law requires the board to come up with “feasible” rules to “prohibit engine exhaust and evaporative emissions” from SOREs by the end of June 2022.

The new law also requires small generators to reach zero emissions, a provision that drew some objections from lawmakers who said that the generators become essential during power outages that plague areas of the state, especially in northern counties, during fire seasons when utilities will shut off power to prevent downed wires from causing wildfires.

But the law allows the Air Resources Board to waive or delay the requirements for generators, based on the “expected availability” of the devices. 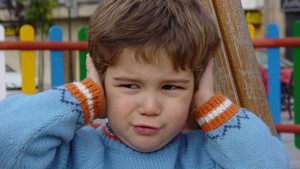 EXPLAINER
How Governments Try to Quiet Down Noise Pollution, Explained
Noise is a form of pollution that threatens public health like any other type of environmental pollution. Here's what federal, state and local governments are doing to quiet things down.