The New Year’s Holiday, Explained: From Mesopotamia to Temecula, How We Celebrate the New Year

New Year's celebrations have been around as long as civilization itself. 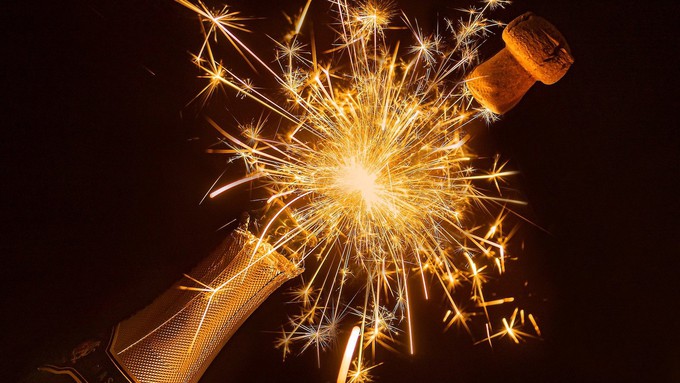 New Year's Day has been a time for celebration for at least 4,000 years. Myriams-Fotos / Pixabay   Pixabay License

From a spectacular fireworks display in San Francisco Bay to a “grape drop” in the Southern California wine-country city of Temecula, an impressive variety of New Year’s celebrations take place up and down the state with the turn of every year. Going back to Gold Rush days, early pioneers who settled in Placer held a “formal” New Year’s fete in 1851, and in the same year history records the citizens of Weaverville dancing to the sounds of an African-American musician known rather derisively as “Black Dan,” who was evidently the only source of music in that little mining town.

During the COVID-19 pandemic, large, public New Year Eve’s events were scaled back, taken online or cancelled altogether, in California and elsewhere. But the worldwide tradition of “ringing in” the New Year will certainly not be stopped, even by a global pandemic. After all, humanity’s compulsion to mark the new year with festivals, rituals, parties and ceremonies is quite literally almost as old as civilization itself.

The “cradle of civilization” is generally considered to be Mesopotamia, a historic region in the Middle East between the Tigris and Euphrates rivers, where the plentiful supply of water from those rivers made the land ideal for settlements that over time developed into the world’s first cities.

The most prominent of those cities, Babylon, was the site of the first known New Year’s celebration, sometime around 2000 BCE. The Babylonians called the holiday “Akitu.” The weeklong celebration marked the beginning of the barley harvest, coinciding with the first new moon after the vernal, or spring, equinox—a logical time to begin a year, when the length of day and night are the same.

Akitu celebrations were sprawling and complex, with lots of singing and parades in the streets, and deep religious as well as political significance. The whole thing centered around Marduk, the most powerful of the numerous Mesopotamian gods. The New Year’s celebration was a rough one for Babylon’s king, who was required to humble himself before Marduk—or more specifically, a giant statue of Marduk in the supreme god’s temple in the heart of Babylon.

The king was stripped of all of his royal finery and forced to kneel in front of the statue, where he would swear that over the previous year he had led the city wisely and honestly, and had not sinned against Marduk. Then the temple’s high priest would beat the crap out of him, slapping the monarch across the face and dragging him by his ears until he burst out crying from the pain.

This was a good thing. The royal tears were taken to be a sign that Marduk approved and gave the king the go-ahead to rule for another year.

The Akitu celebration was held at the beginning of Nissanu, the first month of the Babylonian calendar. The influence of Babylon’s culture is still felt today in the Hebrew calendar, which begins with a month called Nisan.

In a quirk of Jewish tradition, however, Rosh Hashanah—the Jewish New Year—is not celebrated at the start of Nisan, but instead on the first two days of Tishrei, the seventh month, which usually falls sometime during September or October on the Gregorian calendar (the standard calendar used throughout the world today).

According to the scholars of Judaism at the My Jewish Learning site, no one is quite sure when or how Rosh Hashanah (a Hebrew phrase that literally translates as “head of the year”) moved from the first month of the calendar to the seventh one. The first mention of this oddly timed New Year’s holiday occurs in the Mishnah, the definitive book of Jewish law, written sometime around 200 CE—that is, approximately 1,800 years ago.

Though the Babylonian New Year’s celebration dated back about 4,000 years, the oldest continually celebrated New Year’s holiday is the Lunar New Year, or Spring Festival, that began during China’s Shang Dynasty about 3,500 years ago. Californians will be familiar with the Chinese New Year, which is a major event in San Francisco, Los Angeles, and many other California cities. Traditionally, the two-week celebration begins with the second new moon after the winter solstice—sometime in late January or early February.

Like many ancient New Year’s holidays, the Chinese New Year was initially tied to agriculture, in this case, the start of spring planting. The holiday eventually took on mythical meaning. The ritual decorating of homes in bright colors and burning of bamboo (later represented by firecrackers) were supposed to scare away a bloodthirsty beast called Nian who, the legend tells, liked to dine on the men, women and children of China’s villages.

The ancient Roman New Year also marked the vernal equinox—until 46 BCE, when Julius Caesar came along and established himself as the autocratic leader of the Roman empire. He added two months to what was then renamed the Julian calendar, expanding it from 10 to 12 by timing the months to solar rather than lunar cycles, and moving the New Year to Jan. 1, from March 1.

Because the Roman New Year celebrations were, of course, pagan, involving sacrificial offerings to multiple gods, medieval Christians abolished the Jan. 1 celebrations and designated Christmas Day, Dec. 25, as the start of the new year. But in 1582, Pope Gregory XIII had notes. His minor revisions to the Julian calendar resulted in the renamed Gregorian calendar, still in use today, and the comeback of Jan. 1 as New Year’s Day.

The most famous New Year’s Eve celebration in the United States of America, thanks largely to live telecasts on multiple television networks, is the “ball drop” in New York City’s Times Square. Each year since 1907—with a brief pause during 1942 and 1943 due to World War II—a glowing ball descends slowly down a pole atop Times Tower in Times Square, originally the home of The New York Times newspaper, which hosted the ball drop celebration.

New York City’s original New Year’s Eve celebration took place at Trinity Church in lower Manhattan, but in 1904 the Times’ then-owner Adolph Ochs lured revelers to midtown with a fireworks display, to celebrate not only the new year but also the opening of the newspaper’s new headquarters in Longacre Square, an intersection around 42nd Street that Ochs persuaded the city to rename “Times Square.”

After three years, New York City’s government put the kibosh on the fireworks. So Ochs substituted a brightly lit ball made of iron and wood weighing 700 pounds. Today, the eighth and current version of the Times Square ball is 12 feet in diameter, twice the width of Ochs’ original, and weighs 12,000 pounds.

Dick Clark, a disc jockey and host of the pop-music TV show American Bandstand, first broadcast live from Times Square in 1972, bringing the ball drop to all 50 states. Within a few years, Clark became the host and Dick Clark’s New Year’s Rockin’ Eve surrounded the ball drop with performances by the hippest and hottest rock and pop acts of the day, turning the event into not merely a celebration of the new year, but of American pop culture.

No single New Year’s celebration in California has managed to match the Times Square ball drop extravaganza for sheer scale and spectacle. But some have tried to adapt it to Californian customs. Since 2009, Temecula has hosted a “grape drop,” when instead of a ball, a glowing, oversize bunch of grapes descends the facade of city hall. Taking into account the time difference between East and West Coast, Temecula holds not one but two grape drops each New Year’s Eve. The first happens at 9 p.m. local time, which of course is midnight in New York City, allowing local celebrants an alternative to clustering around a television. The second grape drop takes place at midnight Pacific time.

In South Lake Tahoe, the annual “Heavenly Holidays” festival includes a “gondola drop,”  in honor of the region’s many ski resorts. In Orange County, Disneyland—as one might expect—hosts a sprawling New Year’s Eve celebration that at one time included an “orange drop.” But that tradition dropped by the wayside, and now a more elaborate version of Disneyland’s nightly fireworks show highlights New Year’s Eve.

California’s capital city of Sacramento staged its own ball drop to welcome the year 2009, but when a local business applied in 2012 to put on another ball drop on K Street between Ninth and 11th, the city government quashed the plan.

One New Year’s tradition that continues in California—the first day of the year is the day that laws passed by the state legislature and signed by the governor in the year just concluded go into effect. Jan. 1, 2022, for example, will be a good day for food delivery app drivers, because that’s when a new law stopping companies like GrubHub and Uber Eats from keeping driver tips goes into effect. But it will be a bad day for bad police officers. Starting Jan. 1, officers found to have committed acts  of misconduct will be decertified, making it a lot more difficult for them to simply find new jobs at different police departments. 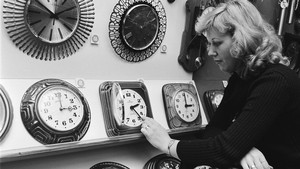 EXPLAINER
Daylight Saving Time, Explained
In 2018, California voted to ditch the twice-annual time shift. But the state still has it. Here’s why.