What are the best, safest bicycle commute and excursion routes through the community? Ask bicyclists. 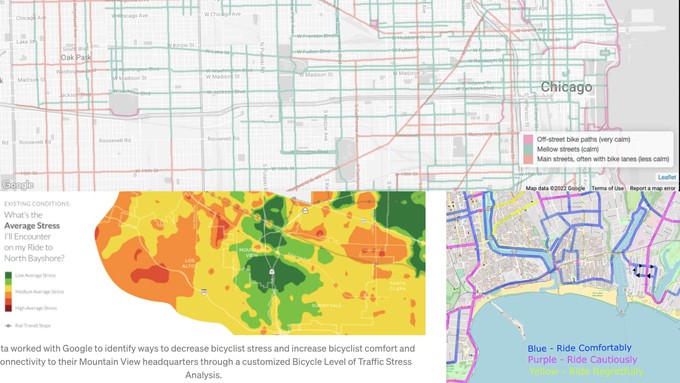 California Local is headquartered in Santa Cruz, on the California coast.

Internally, this sparked some discussion as to how California Local could better support the cycling community and better represent bicycle transportation issues to the community at large.

For instance, we had already invested significant effort in our Traffic & Transportation page, in Santa Cruz and seven other California counties, with a Google traffic map displaying congestion and slowdowns, current CHP incidents, road and lane closures, chain control, the latest images from Caltrans traffic cameras, and links to online resources. There are all sorts of actionable information resources for people who drive, and we collected all of them together in one place for each county.

But when we started looking for resources for bike commuters, the pickings were slim.

So I direct-messaged a couple of local voices active on cycling and transportation issues, Keith Bontrager and Phil Boutelle.

Keith is well known in the bicycle industry as an early developer of the modern mountain bike, and contributes regularly to online discussions about transportation policy and getting around on two wheels. Phil is a mechanical/enery engineer who, in addition to sitting on the City of Santa Cruz Transportation and Public Works Commission, is also a member of local punk ska band Slow Gherkin. At Phil’s suggestion I also reached out to  Amelia Conlen, former director of People Power and now transportation planner at Ecology Action.

After some back and forth in which I queried them about the existence of any online resources about safe bicycling routes in the county and coming up empty, I proposed the idea of crowdsourcing a bike map, to which Phil responded, “Do you know Lloyd Tabb? I think he’s already working on this.”

As it turns out, I do know Lloyd—our kids went to school together. Among other things, Lloyd is the founder of Looker, a large tech company in Santa Cruz, and an avid cyclist. I reached out and he sent me the bike map he put together for his team, covering routes around the city of Santa Cruz.

Using Lloyd’s map as a basis, and ideas from the Chicago Mellow Bike Map, which Keith found, and the notion of Levels of Traffic Stress proposed by Phil, I drew up a specification for a map editing tool, spent a few days coding, and then entered Lloyd’s map, with additions from Keith and Phil.

The Santa Cruz County bike map is live, but it’s just a start. We’re putting out the word so members of the local cycling community can contribute and build out the map and keep it updated.

This is a fun project, not only because I love working with online maps, but because Lloyd, Phil and Keith and Amelia are all actively citizening to make the community better, and that’s good energy to be around.

California Local makes it easy to citizen—and with this project, we hope easier to get around safely on a bike.