Despite myriad obstacles, Dungeness crab remains one of the most valuable commercial fisheries in California. Here’s how it works. 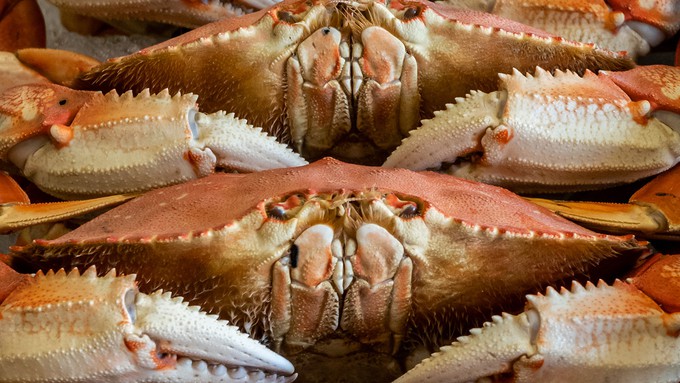 Across California and the Pacific Northwest, fresh-caught Dungeness crabs are a sign of the holiday season, analogous to Thanksgiving and family dinner parties. The commercial fishery for Dungeness is one of the biggest in California, worth between $30 million to $90 million annually. But despite the fishery’s cultural and economic importance, an onslaught of obstacles have made it increasingly difficult for commercial crabbers to reap the benefits of harvesting this well-loved crustacean.

In the central California management area, which includes the Monterey Bay, the Dungeness crab fishery can open as early as Nov. 15 and closes as late as June 30. Northern California has a slightly later season, opening as early as Dec. 1 and closing as late as July 15.

However, the season start in both areas has been delayed multiple times in recent years. Sometimes this is due to poor quality of the crabs. Last year, the California Department of Fish & Wildlife delayed the season start in northern California because in the weeks leading up to the start date, quality tests couldn’t verify that the crabs had bulked up enough following their molting period to support the fishery.

Other causes for delay are unsafe levels of a toxin called domoic acid, or because migrating whales and sea turtles that could potentially become entangled in the crab pot lines are still abundant in the area. The presence of those large marine animals is already cause for a delay this year.

On Nov. 1, the California Department of Fish and Wildlife issued a delay notice for the northern part of the central coast fishery management area (including the Monterey Bay). Agency officials expect to assess the area again on Nov. 22, at which point the director will reevaluate the delay and make a decision about whether to open the fishery in the northern management area on the scheduled date of Dec. 1.

In 1996, when the National Oceanographic and Atmospheric Association (NOAA) began monitoring the Dungeness crab fishery under the Marine Mammal Protection Act, an estimated 1,475 vessels participated in the commercial fishery across the West Coast. By the 2020 season, there were only 501 commercial crabbing vessels.

Despite this declining trend in participation, the Dungeness crab fishery has been the most valuable commercial fishery in California for three of the past 20 years, and the second most valuable in every other year, after market squid. Since 1996, the annual value of commercial Dungeness crab landings has varied from almost $90 million to just under $9 million.

The variation in the size of the catch is somewhat explained by the cyclical nature of the Dungeness crab population, which may be attributed to the Pacific Decadal Oscillation, a 10-year climate cycle of warm and cool periods that occur in parallel with the El-Niño/Southern Oscillation climate cycle. Larval Dungeness crabs are most abundant when the water temperature is lower during the cooler years of the climate cycle. Those baby crabs then take about three years to grow big enough to be included in the commercial catch.

High levels of domoic acid have become a common cause of delayed starts in recent years. This neurotoxin accumulates in crabs and other marine creatures and can poison humans. The 2015 Dungeness crab season, for example, experienced an unprecedented delay, not opening until March 2016 because of the toxin. Domoic acid is produced by a marine plankton called Pseudo-nitzschia, which thrives in warm water. An intense marine heatwave in the eastern Pacific from 2014 to 2016 supported a persistent abundance of the domoic-acid-producing plankton, which resulted in economic losses for fisheries across the state.

In October of this year, Governor Newsom signed SB-80 into law, which gives crabbers more opportunity to fish if domoic acid is a problem. The bill allows the Department of Fish and Wildlife to open areas that would have been closed to commercial crabbers because of high levels of domoic acid. The crabbers must use a tracking device on their vessel that verifies where the crabs are caught and can only sell their catch to verified processors that eviscerate, or gut the crab before selling it to consumers. Evisceration is necessary because domoic acid accumulates in the internal organs of the Dungeness crabs but not in the muscles, which means the crab meat is safe to eat as long as it's separated from the internal organs.

Whale entanglements are detrimental to all parties involved, occasionally causing injury or death to the whale, and almost always causing damage or loss to the fishing equipment. The increase in whale entanglements over the years has led NOAA Fisheries to categorize the California Dungeness crab fishery as a category II fishery, which means the fishery is responsible for killing between 1 and 50 percent of the highest number of animals that can be removed from the population without causing decline.

Crabbers and whale conservationists alike want to avoid whale entanglements as much as possible. The commercial Dungeness season opener was delayed by a few weeks in both 2019 and 2020 and closed a few weeks early in 2021 after aerial surveys revealed that many whales were in the area, making the risk for entanglements with gear too high.

To support the fishery and reduce whale entanglements, crabbers and fishers have joined forces to create the California Dungeness Crab Fishing Gear Working Group. One of the group’s primary goals is to come up with innovative crab trap technology that doesn’t require dangling ropes. But the gear must go through a series of tests before it can be authorized for use. And getting the crabbers to adapt or change out their gear for something new could present another challenge.

Commercial Dungeness crab fishers have also instigated season delays and pauses when they’ve gone on strike a few times in recent years in an effort to negotiate more competitive prices for their cherished catch. After a nearly six-week delay of the start of the 2020 season because of whales in the area, crabbers kept their boats tied up for three more weeks while they negotiated with seafood processors on the price of crab. All parties eventually agreed to $2.75 per pound, rather than the $3 per pound the crabbers were pushing for.

Because some crabbing areas may open before others on the West Coast, Oregon, Washington and California have passed legislation that gives all crabbers a “fair start.” The legislation states that commercial crabbers may not operate in a delayed start area for 30 days after it opens if they have previously been crabbing in other open areas that season. If the crabbers haven’t yet started their commercial crabbing season when a delayed start area opens, then they’re free to start fishing that area immediately.

The good news is that despite years of high and variable catch rates, the West Coast’s population of Dungeness crabs seems to be doing just fine. A study by NOAA researchers published in 2020 in the journal Fisheries Research found that the number of legal-sized male Dungeness crabs has been stable or increasing in the past several decades, especially in Central California.

Want to learn more about the West Coast’s most popular crustacean? Read on.

According to the Monterey Bay Fisheries trust, Dungeness crabs (Metacarcinus magister, formerly Cancer magister) are named after Dungeness, Washington, a small community on the Strait of Juan de Fuca, where they were first harvested commercially.

Where do crabbers operate?

The U.S. commercial Dungeness crab fishery began in San Francisco in 1848, (before Washington became a state) and has been regulated in the state of California since 1895.  Today, the West Coast commercial Dungeness crab fishery exists in Oregon, Washington and California, with the California fishery divided into two separate management areas: North and Central, delineated by the Mendocino-Sonoma county line.

The Tri-State Dungeness Crab Commission is hosted by the Pacific States Marine Fisheries Commission and is led by experts from each state’s fish and wildlife departments. The commission works to enforce synonymous regulations across the three states, such as size limits and season length, and provide fisheries management recommendations to state and federal lawmakers.

Although there have been a few very low-catch years in the past few decades, the general trend has been positive, with high catch rates sustained long enough to pique the interest of seafood markets overseas, particularly in China. In 2018, the U.S. exported 2.8 million pounds of Dungeness crab to China, valued at nearly $20 million, according to foreign export data from NOAA. The growing demand from the international market has helped drive the high prices consumers pay for fresh-caught crab.

How are Dungeness crabs caught?

Crabs are caught using cylindrical traps called pots that look like giant, mesh hockey pucks. The iron frame of the pot is wrapped in netting with one or more small openings for the crabs to crawl inside, and the pot may or may not have bait in the middle. Usually several pots in a row are dropped to the ocean floor between 60 and 300 feet deep. Each pot is attached to a line with a string of buoys that float on the surface.

The size and shape of the crab pots and the length of the attached line are strictly regulated to minimize the trap’s impact on the environment and other wildlife. For example, in an effort to reduce the chances of marine mammals entangling the lines attached to the traps, the line between the trap and the buoy on the surface must be taut and the trail of buoys on the surface must be as short as possible and no longer than 24 feet in water less than 210 feet deep, and no longer than 36 feet in water deeper than 210 feet.

The traps then “soak,” or sit in the water for a period of time ranging from a few hours to a few days, giving the crabs time to enter the trap before the crabbers pull them up. Crabbers are able to soak their traps for up to 64 hours before the season opens, including in delayed-start areas—but they can’t pull up their soaking traps until the official start date.

Are there other restrictions?

Crabbers also can’t keep everything they catch—they can only keep male crabs that don’t have a soft shell (which happens when the crabs molt) and have a shell diameter of at least 6.25 inches. Soft shell crabs, undersized crabs, and female crabs are sorted from the keepers and thrown back to continue living. There’s no limit to the number of keeper crabs fishers can catch and as long as every trap has a $5 buoy tag from the California Department of Fish and Wildlife, crabbers can have up to 500 traps in their fishing arsenal.