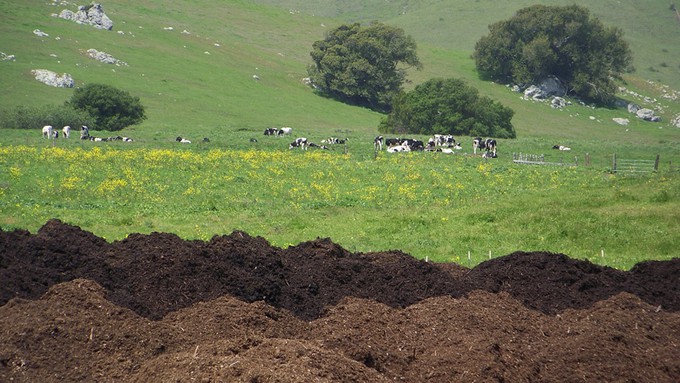 At the dump, food waste is methane-producing garbage. At a farm, it's a valuable part of the food web. Courtesy Californians Against Waste

Beginning in 2022, Californians will receive another bin for their waste, this one for composting food scraps and other organic waste.

It's not because the state wants to encourage gardening, but because composting organic waste is an important step in helping California meet its goal of reducing greenhouse gas emissions to 40 percent below 1990 levels by 2030. It also happens to produce a carbon-sequestering, soil-improving garden product.

The bill mandating this change, Senate Bill 1383, is known as the Short-Lived Climate Pollutant Reduction Strategy, and was authored by Southern California Democrat Ricardo Lara (who as of this writing serves as the state's insurance commissioner). Lara's bill became law in 2017, and set goals for keeping organic waste such as food and yard trimmings out of landfills: Specifically, 75 percent of organic waste is to be diverted from landfills by 2025, and 20 percent of edible food that is currently trashed by grocery stores, event venues and restaurants, among other generators, is instead to be donated to those in need.

What does that mean in terms of volume? In 2014, Californians disposed of 23 million tons of organic waste in landfills. The 50 percent reduction milestone set for 2020 would bring that down to 11.5 million tons, and the target for 2025 is no more than 5.7 million tons of organic waste sent to landfills. Hitting these targets between now and 2025 would prevent the release of between 47 million and 57 million metric tons of CO2 equivalents from the waste sector alone. A CO2 equivalent is a conversion of a greenhouse gas to the amount of CO2 which would have the same global warming impact.

Why Care About Organic Waste?
Doesn't it just break down in landfills? Well, yes, but it does so anaerobically – without oxygen. The result is methane gas, a short-lived pollutant (hence the name of the bill) that packs a wallop. Methane delivers its climate impact over a period of about 12 years, making its life and impact short but intense.

In contrast, organic waste that's composted breaks down aerobically – with oxygen – generating CO2 instead. No, CO2 isn't great for the climate, but its effect is way less intense. And as a big bonus,  the process also produces compost, which has benefits beyond the garden.

Compost makes soil healthier, providing nutrients so farmers and gardeners can forgo pesticides and fertilizers, which come with their own climate impacts. It helps plants and fungi pull carbon out of the atmosphere and store it. Soil amended with compost rather than fertilizer requires less irrigation, which helps during times of drought. And when there's too much rain, composted soil retains water and prevents runoff.

A Long Time Coming
Concern about methane coming from landfills spurred the action that led to SB 1383, according to Nick Lapis, director of advocacy at Californians Against Waste, a key supporter of the bill and a non-profit organization that continues to assist in its implementation.

In 2006, the Legislature passed AB 32, a bill that set the target of decreasing the state's greenhouse gas emissions by 40 percent below 1990 levels by 2030. To get there, the state had to tackle methane emissions, and landfills are a major source of those emissions.

While it's difficult to find agreement on just how much methane landfills generate and how much of that is captured--“You can't put a bubble over a 500-acre hole in the ground and say ‘this is how much came out,’” Lapis says  – it was clear that methane from landfills needed to be reduced to make a dent in greenhouse gas emissions. The best way to do that is not to generate it in the first place.

So the California Air Resources Board identified diverting organic waste from landfills as one of the most important tasks to achieve these goals.

“And this was actually kind of groundbreaking because historically, people have looked at climate change as tailpipes and smokestacks and the idea of recycling or composting as part of that hadn't really been in most other plans before that,” Lapis said.

The other goal of the bill, to divert 20 percent of perfectly edible food from landfills to food banks, comes at a good time. According to the California Association of Food Banks, almost a quarter of all Californians face food insecurity, which is the occasional, and sometimes constant, lack of access to food.

The regulations implementing SB 1383 require those who generate edible food waste, usually grocery stores, event venues and restaurants, to donate the “maximum amount” of food they can to reduce waste.

Challenges and Opportunities
The California Department of Resources Recycling and Recovery (CalRecycle) established the regulations for SB 1383. They go into effect in 2022, to allow cities and counties and waste management agencies and companies time to prepare, and local jurisdictions are still in varying stages of readiness, hampered in part by COVID-19.

Other challenges and concerns include finding markets for the compost once it's made. Infrastructure is another. Once trucks have picked up the compost, where do they take it? And where do food banks store the extra food?

Lapis noted that building composting facilities takes time. Even if the question of odor is addressed, trucks still run in and out, bringing questions of traffic and noise. But, he said, composters have noted that they have been able to sell compost, and infrastructure is coming along for both composting facilities and food banks. Though the challenges are real, they are not insurmountable.

Opportunities also exist for smaller-scale, local composters who already have been helpful in educating the public, Lapis said.

That points to the economic benefit of SB 1383. CalRecycle estimates the strategy of diversion of organic matter will generate $17 billion in economic benefits, including 80 to 90 new facilities,  4,500 temporary construction jobs, and 11,700 permanent jobs. .

This is just one piece of a national plan hat sees climate action as an economic stimulus. As Pres. Joe Biden noted in his speech to Congress in April, "If we act to save the planet, we can create millions of jobs and economic growth and opportunity." 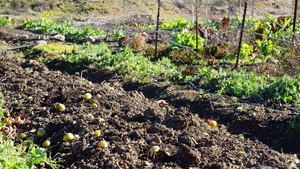 NEWS
Compost Belongs in the Garden
Californians Against Waste was one of the main advocates behind SB 1383, which requires California to divert 75 percent of its organic waste from landfills. California Local talked to CAW’s Nick Lapis to learn more about what it does and why.