The Art of Noise: Efforts to Manage Noise and Create a Quieter Environment, Explained

Too much noise is a form of pollution. So what are governments doing about it? Luis Miguel Bugallo Sánchez / Wikimedia Commons   Public Domain

Environmentalism has been around for as long as civilization itself, but in the United States, the 1960s and early 1970s could be called the Golden Age of the environmental movement. Highlights include the 1962 publication of naturalist Rachel Carson’s book Silent Spring, the work of pioneering ecologist Barry Commoner, and the 1970 creation of the U.S. Environmental Protection Agency (EPA), established in an executive order by President Richard Nixon.

Most environmental activism in that era, however, focused on the insidious effects of man-made pollutants, poisonous chemicals and emissions on the air, water and land. At that time, the damaging effects of human-created noise were (as described in a 1991 report to the Administrative Conference of the United States) “a distant cousin in the family of environmental issues and…outside the mainstream of the environmental movement ever since.”

California passed its Noise Control Act in 1973, the year after the United States Congress passed the federal version. The state law sets standards for managing noise in new buildings and developments, and requires that a “Noise Element” be included in city and county general plans. But most enforcement of noise ordinances and responses to noise complaints happens at the local level. The state gives cities and counties broad authority to set their own noise limits.

Why ‘Noise’ Can Be ‘Pollution’

So what is noise? And why can it be considered “pollution?”

Unlike toxins in the air and water, which can be clearly identified and defined, noise is a somewhat nebulous concept. Most definitions of noise describe it as unwanted sound that is too loud, and causes disturbance and annoyance in those exposed to it.

Noise can have a wide range of harmful health effects, the most obvious being damage to hearing. In fact, noise that is loud enough—about 160 decibels—can instantly puncture a human eardrum. But 160 decibels is really loud—louder than military jet takeoff (140 decibels) and much louder than the sound in the front rows of a rock concert, which comes in typically at 110 decibels.

Other studies have suggested that every additional 10 decibels of noise from aircraft taking off and landing causes an increase in hypertension, heart attack and stroke of up to 17 percent. Also in 2018, the World Health Organization released a new set of guidelines that for the first time added wind turbines and “leisure noise” as significant sources of harmful noise pollution that need to be regulated. “Leisure noise” is noise from bars, nightclubs, rock concerts and other sources of entertainment that produce high decibel levels.

Noise pollution can cause permanent harm to children. According to the Washington, D.C., nonprofit Children’s Environmental Health Network, children exposed to noise pollution are more likely to experience delays in learning to read. And as they struggle to tune out noise, children also will shut out the voices of teachers, again setting back their learning process.

And like many environmental and public health issues, noise pollution is subject to racial and economic inequities. A 2017 study by researchers at the University of California and several other institutions found that noise levels were about four decibels higher on average in predominantly African-American neighborhoods than in those with a low number of black residents. The levels were about three decibels louder in neighborhoods where 50 percent of people lived below the poverty line, compared to neighborhoods where no one did.

The Rise and Quick Fall of Federal Noise Regulation

None of this data was available to noise-control advocates in the 1960s and ’70s. They had trouble establishing a direct link between noise and harmful health effects. On the other hand, the damage caused by pesticides, lead, and other pollutants was well documented even in that era. The battle against noise pollution also lacked a clear villain. Environmental activists had an easy time pinning blame for the abysmal state of water and air on rapacious corporations, but who was the bad guy behind noise pollution?

Nonetheless, in the early 1970s, the problem of harmful noise received some federal attention. In 1972 the Republican President Nixon proposed, and a Democratically controlled Congress passed, the Noise Control Act. The law authorized the newly created EPA to regulate noise generated by anything broadly defined as part of interstate commerce—plane, trucks, trains, buses and so on—as well as to set noise standards for consumer products ranging from car engines to jackhammers.

The law created the Office of Noise Abatement and Control (ONAC) within the EPA, to enforce anti-noise regulations and to provide support, including funds, for state and local governments in their efforts to control environmental noise. Then, in 1980, America changed course, electing former California Governor Ronald Reagan as president. In 1982, 10 years after Nixon created it, the Reagan administration cut off all funding for the ONAC.

What that meant is, though the ONAC was not abolished and at least on paper continues to exist today, state and local governments were on their own when it came to controlling noise. And have been for the past four decades.

California Stands as a Leader in Noise Pollution Control

With the defunding of the ONAC, California’s Noise Control Act of 1973, and the Office of Noise Control it created, had to go it alone. According to the Administrative Conference of the United States report, California has some of the country’s strongest noise-abatement measures in place.

As part of every city or county general plan, schools and hospitals must be located in areas where they will not be exposed to excessive noise. Building codes must include noise abatement standards, and even roads have been designed to divert traffic away from areas that would be affected by noise.

Most cities have their own noise ordinances, often including criminal penalties. In Los Angeles, deliberately creating “loud and unreasonable noise” is punishable by a $400 fine or a stretch in county jail up to 90 days. The San Jose city code prohibits “all noises which are disturbing or unreasonably loud.” The ordinance singles out such noises as “revving of the engine of any motor vehicle while such vehicle is not in motion,” “unreasonably loud shouting, screaming, wailing or other vocalization,” and “crying of peddlers, hawkers, vendors or newspaper carriers,” among other offending noises.

In San Francisco, SFO airport has its own Noise Office. In 1983, “SFO was the first airport in the country to prepare a Federal Aviation Regulation (FAR) Part 150 Noise Compatibility Study, allowing SFO to receive noise compatibility funding,” according to the Noise Office website. As a result, according to the site, noise levels at the airport have actually decreased since 1983, even as the number of flights in and out of SFO had gone up.

A void still remains at the federal level when it comes to noise pollution control. In 2017 a New York City congressional rep—Democrat Grace Meng of Queens, where both JFK and LaGuardia airports are located—introduced the Quiet Communities Act, which would reopen the ONAC. The bill would take noise abatement authority away from the Federal Aviation Administration and give it back to the EPA. But the bill died in committee. 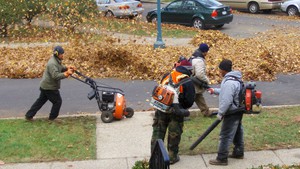 EXPLAINER
Is California’s New Leaf Blower Ban Really a Ban?
New law cracks down on those annoying and polluting leaf blowers, but can more be done?