This year, an estimated 60,000 birds have been poisoned by botulism in one of the oldest waterfowl conservation reserves in the state. 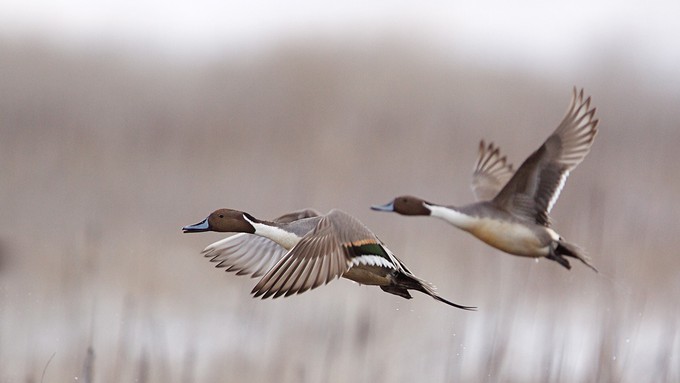 Northern pintails and many other species of waterfowl depend on marshland in the Klamath Basin during migration. Tom Reichner   Shutterstock.com

California has been warring over water ever since the gold prospectors arrived. The struggle has worsened during this historic drought—but as a recent piece by Sacramento Bee staff writer Ryan Sabalow reveals, it’s particularly nightmarish in a remote corner of the state. In northeastern California’s Klamath Basin, farmers, birders, and members of the Klamath Tribes are in a three-way struggle for dwindling water supplies.

Sabalow knows the area, having hunted ducks there all his life. Once a remote wetland, the landscape has changed: Sabalow writes of “brush growing in ponds that once held knee-deep water, scaly cracks at the bottoms of dry irrigation canals, a fog of wildfire smoke obscuring the hillsides.” The wetland is one of the oldest waterfowl conservation reserves in the state. Drained and dammed, it became productive for farming. But this year, an estimated 60,000 birds have now been poisoned by a strain of botulism lurking in the mud. Though many have to be euthanized on the spot, there’s a good success rate with the help of fresh water, food and antibiotics.

Next year’s scheduled demolition of four dams on the Klamath river are intended to aid the Yurok, Karuk and Hoopa Valley nations downstream, who are all depend on the salmon runs. Political stalemates have slowed the progress when there’s no time to lose. Clayton Dumont, a councilman of the Klamath Tribes, describes efforts to balance the demands of farmers and wildlife as “lighting your neighbor’s house on fire and showing up with a garden hose and patting yourself on the back.”