At long last, the state has a world-class museum to commemorate one of its most essential industries. 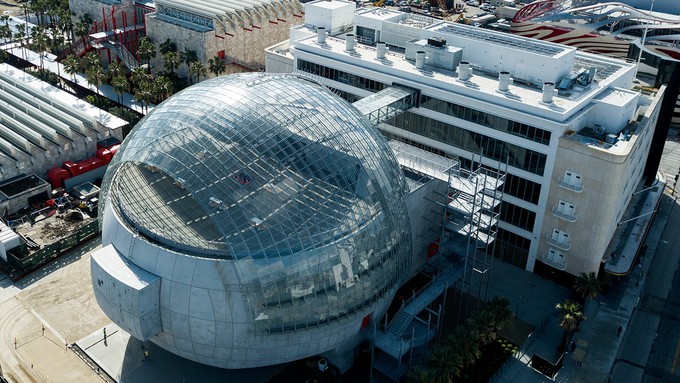 Renzo Piano’s “a soap bubble that will never break” is now open to the public, showcasing highlights of cinema history. Ringo Chiu   Shutterstock.com

“The old lady and the beautiful young lady.” That’s how architect Renzo Piano describes his work on the Miracle Mile in Los Angeles. The newly opened Academy of Motion Pictures Museum’s “beautiful young lady” is a vast, round glass structure connected to the black and gold Streamline Moderne May Company department store. This, one of the handsomest buildings in California, was built in 1939 and has been renamed the Saban Building.

Piano codesigned the Pompidou Museum and the California Academy of Sciences in Golden Gate Park. His new sphere structure is worthy of those predecessors. Piano calls the structure “a soap bubble that will never break”; fans with Lucasfilms on their minds have nicknamed it the Death Star. At the opening, Tom Hanks told the press that Piano’s glass sphere looked like something ready for the next Dr. Strange movie.

The Hollywood Reporter covered the ultra-posh inaugural fundraising gala with donors paying $50,000 a ticket. Guests included Tom Hanks, Laura Dern, Nicole Kidman, Sophia Loren, and Lady Gaga. Vanity Fair rostered who was there and what they were wearing.

The AP’s Andrew Dalton ran the numbers: the museum is seven stories tall, about 300,000 square feet, including a 1,000-seat theater named in honor of David Geffen. The price tag was $388 million. Hanks, on the board of directors, claimed it takes exactly 3.5 days to see everything in the museum.

Toy Stories
Dalton quoted Hanks on the actor’s favorite display at the new museum: no surprise that a man enamored of vintage technology such as typewriters was fond of the proto-cinema toys the museum displays. Hanks described them: “It’s a room that is filled with old magic lanterns. ... Through the power of focused candlelight, [it] projected a lifelike image on to a blank wall.”

The AV Club snarked that the museum is more than just “a fancier Planet Hollywood without the soggy french fries.” They offer a slideshow of their own highlights: the Ruby Slippers from The Wizard of Oz, the flowery May Queen gown from Midsommar, and the trusty brown bathrobe of “the rare, fragrant Dude,” as David Thomson called him. All 20 of Pedro Almodovar’s films play on multiple screens in one exhibit, and there’s a whirling 3D zoetrope of the Toy Story characters. (I’ve seen this, when it was at the Oakland Museum of California, and it’s a startling optical illusion.) In an exhibit of studio backdrops stands the 34-foot-tall painting of Mt. Rushmore from North By Northwest.

The Academy is trying to avoid recasting the history of cinema as all about Hollywood, with an inaugural exhibit of memorabilia from Japanese animator Hayao Miyazaki and Studio Ghibli. USA Today’s coverage stresses that non-white Hollywood is represented, as is the legacy of prejudice—one instructive exhibit, per Spike Lee’s Bamboozled, shows how blackface makeup was concocted, as well as the method for turning European actors such as Warner Oland or Nils Asther into Asians. Lee has a room of his own at the museum, which includes the purple suit he was wearing the night the director/writer got Oscared for the script of BlacKkKlansman. The museum just hosted a ceremony with Ava DuVernay (Selma) passing on a Vantage Award to Ethiopian director Haile Gerima for her 1993 film Sankofa (here compared favorably by RogerEbert.com’s Robert Daniels to the similarly plotted Antebellum).

A Big Bunny and a Beautiful Monster
On his Facebook page, animation historian Jerry Beck gaped at a four-foot-tall model of Bugs Bunny that used to stand on Bob Clampett’s desk at the Termite Terrace. Elsewhere in this vast museum is the stuff that dreams are made of, such as the sled Rosebud from Citizen Kane. But there are nightmares too—Bruce the Shark from Jaws floats in the atrium—and there’s an exhibit of the enchanted amphibian prince from The Shape of Water. Interactive displays abound. Groundlings can cue up to a simulator so that they can receive an Academy Award, thanking the little people or calling out parents that always told you you’d never amount to anything.

As the museum opened its doors, across the street at the Petersen Automotive Museum, the exhibit “Bond in Motion” was on view: the single largest display of 007 vehicles ever shown in America. The 30-piece collection includes items as beloved as the 1964 Aston-Martin DB-5 and as dimly remembered as the flying “parahawks” from The World Is Not Enough.