Get Ready For Another Gas Tax Increase 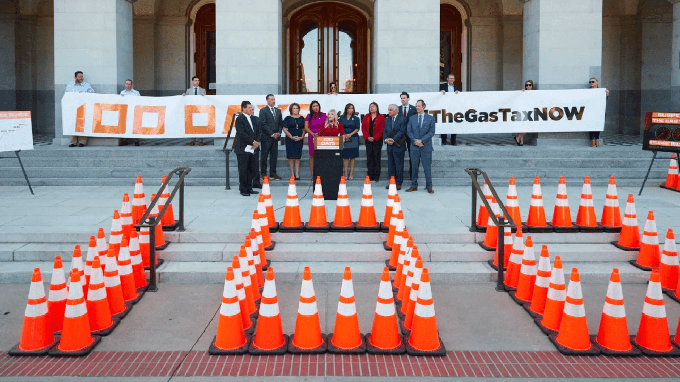 Republican lawmakers stand outside the California Capitol behind traffic cones creating the numeral "100." Photo courtesy of the Senate Republican Caucus

July 1 is shaping up to be a big day for California.

That’s when the Golden State’s sky-high gas prices are set to tick up even more due to a scheduled increase to the excise tax rate, which will tack nearly 3 cents per gallon onto prices at the pump. On Wednesday, drivers were already paying an average of $6.44 for a gallon of regular gas, compared to the national average of $5.01.

July 1 also marks the dawn of California’s new fiscal year — although the state’s spending plan is far from finalized. Lawmakers on Wednesday sent to Gov. Gavin Newsom’s desk a $300 billion placeholder budget, which the governor criticized earlier this week for failing to include “more immediate, direct relief to help millions more families with rising gas, groceries and rent prices.”

A similar message was struck Wednesday by a group of Republican lawmakers, who gathered outside the state Capitol in front of a huge “100” constructed out of bright orange traffic cones. According to the GOP legislators, Friday will mark 100 days since Newsom first floated the idea of gas tax relief in his March State of the State speech.

But it isn’t just Republicans who have pushed to postpone gas taxes during an election year when many voters cite the cost of living as a major issue.

Read “Get Ready For Another Gas Tax Increase” on CalMatters.

SIGNAL BOOSTER
Newsom Wary of Lawmaker-Approved Budget
Depending on whom you ask, the $300-billion-plus budget bill California lawmakers passed on Monday either was developed largely behind closed doors, ignores the state's biggest problems and fails to provide urgent relief amid skyrocketing inflation — or offered ample opportunity …

SIGNAL BOOSTER
Inside One of the Capitol’s Most Secretive Processes
The suspense file allows lawmakers to shelve proposals that are too expensive. It also allows them to silently euthanize those that are controversial.