Why Heavy Traffic at California Ports May Have Caused Massive Oil Spill, Explained 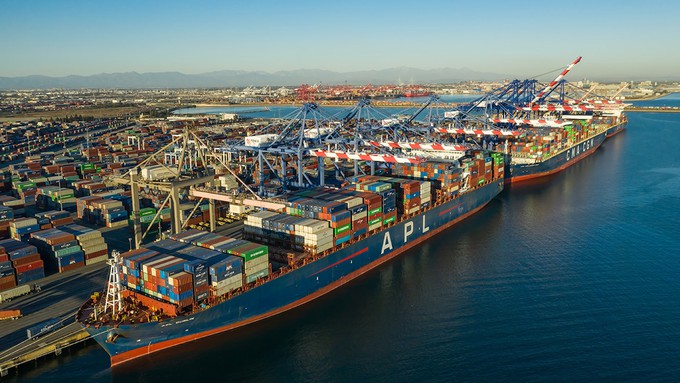 UPDATE: On October 20, Gov. Gavin Newsom signed an executive order aimed at relieving maritime traffic jams at California ports. In the order Newsom instructs state officials to identify land—public and private—that can be used to store empty shipping containers, so that they no longer clog up the docks at Long Beach and Los Angeles ports.

Newsom also ordered the state to find new routes for freight trucks that haul cargo to its ultimate destination after being unloaded from ships. The shortage of trucks has been a contributing factor to the backup at ports. Trucks under Newsom’s order would also be temporarily exempted from current weight limits, allowing more of them to move along California's roads, helping to clear the docks.

A massive oil spill off the coast of Orange County on Oct. 1, 2021, sent 144,000 gallons of thick, black crude into the waters and onto the beaches in just the first four days after the accident. When divers went looking for the source of the spill, they found one section of an 17.5-mile pipeline, about 4,000 feet long, sported 13-inch-wide gash, and the pipeline appeared to have been dragged 105 feet from its location along the ocean floor, four-and-a-half miles offshore.

The pipeline runs from an offshore oil rig known as Elly, one of 23 such platforms that sit in federal waters—that is, more than three miles from the California coast—to a refinery in Long Beach. Elly is one of three rigs run by Beta Operating Company LLC. The platform sits above waters 255 feet deep, 8.6 miles off the Port of Long Beach. Elly is an oil processing plant, which doesn’t actually pump its own oil. The oil comes from its sister rig, Ellen, which connects to Elly via a footbridge. A third Beta-owned rig, Eureka—positioned in 700 feet of water, nine miles off the Long Beach shore—also pumps oil that is processed by Elly.

The builders of the offshore rigs did not plan for a cargo ship to drop its anchor almost five miles offshore. Though the cause of the Orange County spill would take months to determine, early indications pointed to exactly that—a collision between an anchor and the pipeline.

The steel pipe is a half-inch thick and covered by a full inch of concrete, Martyn Willsher, chief executive of line operator Amplify Energy Corp., Beta’s parent company, told Bloomberg News, adding that for that pipeline to somehow be dragged 105 feet out of position was “not common.”

A cargo ship’s anchor weighs at least 10 tons, and even then it does not hold a ship in place. Anchored ships can drift hundreds of feet due to currents, winds and other weather conditions. A ship anchored off of the port of Long Beach, according to preliminary findings by federal investigators, appears to have dropped its anchor and then drifted enough for the anchor to hook the pipeline, lacerating it and dragging it, according to an Associated Press report.

Experts who spoke to the AP said they had never heard of a ship’s anchor hooking and dragging an oil pipeline. ILike air traffic controllers, managers at a port direct ship traffic and give instructions on where they may drop anchor. One week after the accident, investigators had not determined whether a ship was allowed to drop its anchor too close to the pipeline, or if a ship’s crew anchored without authorization.

Why would either of those screw-ups happen?

The reason appeared to be a maritime traffic jam that had been clogging not only Long Beach but all of California’s 11 commercial ports. As of mid-September, according to the trade publication American Shipper, a record-smashing 73 ships were anchored off the ports of Los Angeles and Long Beach. The ports can safely accommodate between 27 and 31 ships at a time, meaning that the overflow ships were required to drift, that is, set down their anchors further out into the ocean and wait until a berth in the port came open.

That wait topped out in September at nine days, based on a 30-day rolling average, another all-time high for the Los Angeles-area ports. A total of 414 ships arrived there in September, up from 344 a year earlier.

On the day that the spill occurred, there were 64 ships in the Los Angeles and Long Beach ports. That was a Friday. By Monday there were 76 ships there, but the number dropped to 62 the next day. The average wait time to be moved into a berth, where longshoremen can unload a ship’s cargo, had risen to 10 days.

The reasons for the unprecedented congestion all appear to stem from the COVID-19 pandemic. Once shipping containers are unloaded by dock workers, they need to be hauled off the pier to make room for the next ship’s worth of goods. But increased demand for at-home deliveries due to the pandemic led to a shortage of truck drivers. According to a CNN report, the shortage means that there are not enough trucks to take away the empty containers, which delays the time it takes to allow ships into port to unload their own containers.

The pandemic also created a shortage of the containers themselves. The disruption in the global supply chain caused, in part, by the container shortage has more recently led to an increase in shipping to make up for the previous shortfall.

A surge in American demand for imported products from China is also driving the increase in maritime cargo traffic. According to the U.S. Commerce Department, in figures cited by the Associated Press, imports from China rose 1.4 percent in August and the U.S. trade deficit with the world’s most populous country ballooned by 10.8 percent. The trade deficit with China was up 13.7 percent through the first eight months of 2021, compared to 2020.

The Los Angeles and Long Beach ports are among the world’s busiest. Up the coast the Port of Oakland ranks as the fourth-busiest in the United States, and 20th worldwide in volume of containers. The Oakland port has not escaped the congestion problem. In mid September, the port was clogged with 30 ships occupying berths in the port and 55 ships anchored further out in the ocean waiting their turn.

Congestion at ports is a nationwide problem. In fact, it’s a North American problem. Ports in Vancouver have also experienced heavy traffic in 2021, according to an American Shipper report. But California is being hit hardest. In Georgia, the Port of Savannah earlier in 2021 appeared headed for a backup on the scale of California’s ports. But Georgia Ports Authority Executive Director Griff Lynch said that his state had a “simpler story,” attributing the backup to unusually heavy fog cover on the Savannah River. 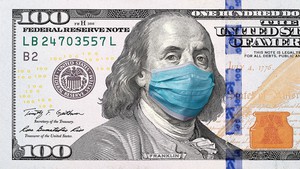 EXPLAINER
Why California Jobs Have Been Slow to Come Back, Explained
Extended unemployment benefits, the state's eviction moratorium and other COVID relief measures have ended. But people are still out of work and hurting in California as the recovery remains slow.