California is doing something to stop the mass slaughter of animals on the roads. 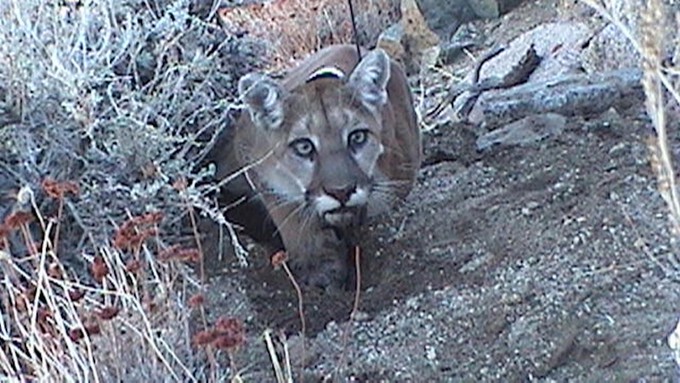 Mountain lions and many other species are in danger from collisions with cars. California Department of Fish and Wildlife   C.C. 2.0 Generic License

Few things are more American than driving, and since 1908, when the ribbon was cut on the first road built exclusively for motorized cars just outside of New York City, the 50 states have been crisscrossed and covered with more than four million miles of paved roadway.

In 2021, Americans drove a total of 3.23 trillion miles, according to the U.S. Department of Transportation (USDOT). That’s enough miles to cover the distance from Earth to the dwarf planet Pluto at the outer edge of the solar system—1,000 times.

All that driving over those millions of miles of road takes a grim toll. To enable drivers to get everywhere in  this country, roads must cut through huge swaths of the natural habitat occupied by nature’s own creatures.

The heartbreaking consequence of automobiles ripping through land occupied by wildlife is that animals are hit by cars and slaughtered in staggering numbers. A 2008 study by the USDOT found about 300,000 reported collisions between cars and large animals each year. But that number is generally believed to be far lower than the actual total, the study said, because most collisions with large wildlife go unreported, for a variety of reasons.

The true number of Wildlife-Vehicle Collisions, or WVCs,  is probably “between one and two million.” While approximately 200 human beings die from these collisions each year, the vast majority, about 95 percent, cause no human injuries at all. But animals are not as fortunate. WVCs kill animals so often that, according to the USDOT study, 21 wildlife species listed as endangered—from rabbits to geese to crocodiles—suffer collisions with automobiles as a leading cause of their mortality.

What can be done to reduce this carnage on the roadways, and keep animals safe? Animals risk death by crossing roads, but simply fencing them off so they are unable to cross is not an answer. Confining animals to smaller populations cut off from each other leads to excessive inbreeding, which perpetuates genetic flaws and diseases that can also lead to extinction threats.

One answer is to make it easier for animals to get from one side of the road to the other by creating safe passageways across roadways. That is, bridges and tunnels. In Agoura Hills, just north of Los Angeles, a combination of state and private funding is behind construction of the Wallis Annenberg Wildlife Crossing, a project estimated to cost $87 million and which when complete will be the world’s largest bridge built for animals to cross a road.

The bridge will be planted with vegetation to make it largely indistinguishable from the habitat that exists on either side of the 10-lane section of Highway 101 where the crossing is expected to be completed in 2025.

Here are five locations where California is attempting to stop the mass killing of animals on the highways, with wildlife crossings that either already exist or are under construction.

More than 65,000 vehicles every day drive on State Highway 17 in the Santa Cruz Mountains, bifurcating 30,000 acres of protected natural habitat. As if crossing that road wasn’t hazardous enough for the wildlife on either side, a concrete median divider creates another imposing obstacle, leading to what the Santa Cruz County Regional Transportation Commission calls a “large volume” of animal-vehicle collisions. The victims include deer, coyotes, and mountain lions.

In February of 2022, construction got underway at the Laurel Curve section of the highway on a $5.4 million tunnel that will run under the highway providing safe passage for wildlife to move from one side of the road to the other. Strategically placed fencing will help direct the animals to the undercrossing.

The Highway 89 Stewardship Team—a collaboration of several state agencies, and universities—operates two 12-foot long, 10-foot wide, undercrossings on a 25-mile length of highway running between Truckee and Sierraville in Sierra County. The passageways are basically just metal culverts that run under the road, installed at a cost of $2.8 million in funding from the State Highway Operation and Protection Program.

Like the Highway 17 project, the project also includes fencing—1.3 miles of it—designed to steer animals away from the road and into the two undercrossings. The locations of the passageways were determined using 27 years worth of Caltrans data on the movements of animals in the Highway 89 area. More than 1,000 mule deer have been killed by cars in the Loyalton-Truckee area of Highway 89 in that time span, according to the data.

Four years before construction got underway on the Wallis Annenberg bridge in Agoura Hills, Riverside County completed a double-archway wildlife bridge over a six-lane extension of Clinton Keith Road in Murrieta. The new roadway sliced directly through a Western Riverside County Multispecies Habitat wildlife reserve, and data identified the Clinton Keith location as a “hotspot for wildlife migration.”

In this case, the wildlife who can receive safe passage using the bridge include not only large animals such as deer, mountain lions, coyotes and roadrunners—but butterflies as well. Specifically, the low-flying Quino checkerspot butterfly, listed as endangered by the federal government, must elevate their flight paths to get over the bridge, keeping them from ending up as splatter on the windshields of cars that breeze through the area.

“Nonmigratory animals do not fly high. They fly low. They end up about level with a car. The overpass will get them to go higher than a road, to align them with the topography,” Tricia Campbell of the Western Riverside County Regional Conservation Authority told the San Gabriel Valley Tribune.

The first wildlife crossing in Los Angeles County, the state’s most populous county, was completed in 2006. Within nine days of its debut, deer were photographed using the artificial tunnel to safely pass underneath Harbor Boulevard, near Vantage Point Drive in La Habra, at the point where the roadway cuts through the Puente-Chino Hills Wildlife Corridor.

According to a research study conducted at the University of California Davis, by April 2007 coyotes were photographed using the underpass about 27 times per month. Deer used the tunnel less frequently—only about twice per month. At least, that’s how many were captured on the researchers’ cameras.

Before the installation of the underpass, according to data collected between 2004 and 2006, 31 animals died from vehicle collisions on Harbor Boulevard. Coyotes (39 percent) were the most frequent victims. Two bobcats also fell victim to cars on the road.

The study found, however, that local animals may have been having trouble finding the underpass. Though its usage was “relatively high,” the first 10 months after the tunnel opened saw no drop in roadkills in the areas.

The mountain lion population in the Santa Ana mountains numbers only about 30. The cats suffer from genetic inbreeding as well as the danger of vehicle strikes, and could disappear completely over the next 50 years, Cara Lacey of the Nature Conservancy told the San Diego Union Tribune. The cats need to cross over to the Palomar mountain range, where they can find mates from a fresh gene pool, expanding their genetic diversity, but are prevented from crossing by the Interstate 15 highway.

One study found that only seven have managed to survive the road crossing in a 15-year period leading up to 2018.

In 2018, the Nature Conservancy purchased 73 acres of land on the east side of Interstate 15 south of Temecula, at a cost of $1.69 million. The project remains in the planning stages, however. While mountain lions are the primary targets of the project, planners say that numerous other species, including raccoons, frogs and deer, will also benefit from the safe crossing. 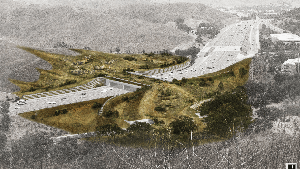 NEWS
The Bridge to Coexistence
The Wallis Annenberg Wildlife Crossing will help pumas and other critters in the Santa Monica Mountains cross 10 lanes of Highway 101. 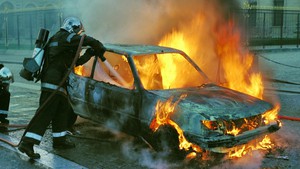