Ridden Out of Town on the Rail Trail

It was a short train ride, but it was decades in the making. 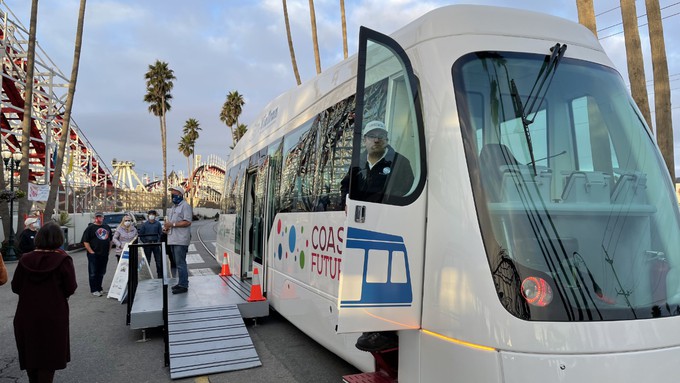 Perusing Twitter on Saturday morning around 7 a.m., I saw the announcement about the upcoming electric train demonstration leaving at 8 a.m.

Santa Cruz County has an old rail line which stretches 32 miles across the length of the county coastal strip, linking Davenport in the north to Watsonville in the south. The Santa Cruz County Regional Transportation Commission, the government entity administrating the line, is currently engaged in a project to build a multi-modal path paralleling the railroad tracks.  And while there is support for passenger rail on the line, there is also pushback, with some members of the community advocating for a no-train utilization of the line,

Highway 1 has been a transportation bottle neck and pain point in the county in the almost four decades I've lived here. And as housing prices in the north part of the county have continued to rise, more of the workforce has to commute further from more affordable housing in the south part of the county to their jobs up north.

Like traffic jams on Highway 1, trains, and especially electric trains, have been a topic in Santa Cruz for decades, and as something of an infrastructure geek, I've often pondered the question and debated the rail/no rail trail over many a beer with others.

So when I read about a demonstration of an electic train,  I walked over to bum a ride.

It would be correct on several levels to say there was a carnival atmosphere in the air, first because the boarding area for the demonstration ride was at the Santa Cruz Beach Boardwalk and second because of the happy vibe of the volunteers at the information booth and crewing the vehicle.

Everybody loves trains, kids and adults, and a lot of local kids have grown up crawling on and falling off the big old steam engine in the Harvey West Park playground. And there's a committed pro-train community here ranging from the Roaring Camp steam and diesel hobbyist crowd to local mass transportation advocates.

The single vehicle looked like your basic airport people mover and looked like it could accomodate 30ish commuters seated and standing. 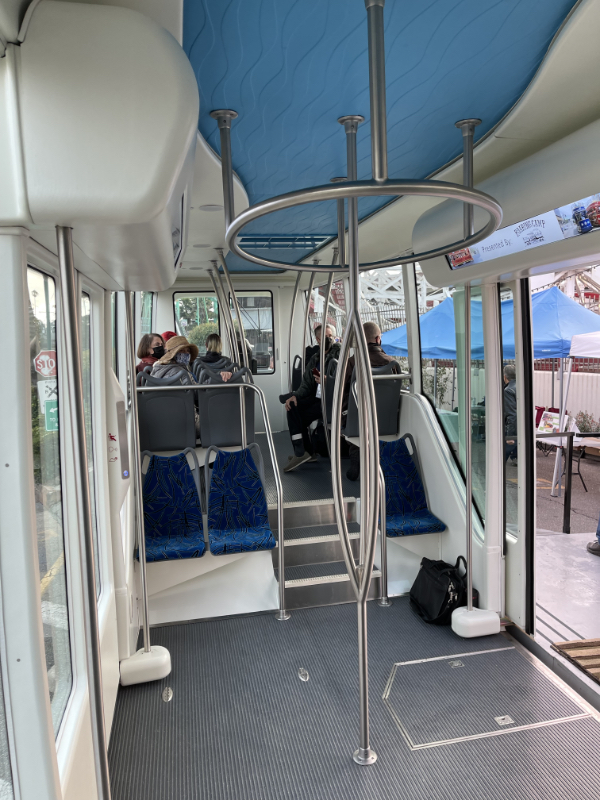 The vehicle can go forward or backward, with controls at both ends for the operator.

The vehicle was operated by folks from Roaring Camp, and after everyone was aboard, the doors slid shut and off we went to Capitola, about 5 or 6 miles away.

At every car crossing, volunteers in high viz and hard hats did car control.

Brad Read, president of TIG/m which manufactures the electric train vehicle in which we were riding, outlined the costs and some details of providing electric train service on the 32 mile rail trail.

He claimed the cost to purchase rolling stock and rehabilitate the rail and road bed to passenger rail standards would be $120M, and that it could be privately financed. He detailed a system of six cars and 15 stations/stops with sidings in various places to get around the fact that there would be six cars going two directions on one track. Various interior configirations could accomodate bikes, dining or a bar car. Up to three cars can connect to form a "train." Each car costs around $2M-$3M depending on the configuration.

When we returned back to the Boardwalk, I was impressed; not only with the electric train car as a quiet and efficient mode of transport on the rail portion of the rail trail, but at the sheer number of volunteers and amount of effort required to make the demonstrations happen.

Intrigued, I sent an email to the info address at the coastfutura.org website touting the demonstration rides and received a reply from MillerMaxfield,  the local pubic relations firm, and had some back and forth with Jennifer Murray there.

According to her, the demonstration took a couple years to organize (delayed by COVID, too) and involved the Santa Cruz County Regional Transportation Commission, which provided access to the rail line; Roaring Camp, which provided operators for the rail vehicle; and about 120 volunteers from local pro-rail groups and the community, with 2,000 members of the community taking demonstration rides over two weekends.

The genius of our democracy is that when common resources are at stake, the stakeholders come together to determine the outcome.

Now, the national political press has adopted a line that "democracy is under threat," and maybe it is.

But at the local level, this one little train ride reminded me that well intentioned people are working together to make things better, and the quiet work of democracy keeps chugging along. Whether or not the community decides to go with passenger rail in the County, the democratic process of making that decision endures.

Editor's note: We've included information about local transportation groups and the related governing authorities in Santa Cruz County next to this blog. Get involved.

County of Santa Cruz Board of Supervisors

Friends of the Rail and Trail