California Election Drama May Be Yet to Come

Ultimately, which party ends up in control of Congress could conceivably be decided by races in the Golden State. 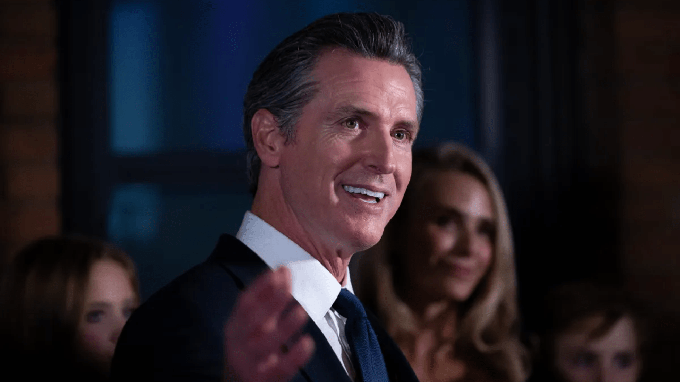 Gov. Gavin Newsom speaks to the media at a Prop 1 celebration event at The Citizen Hotel in Sacramento on Nov. 8, 2022.

After months of anticipation and buildup, California’s general election came and went — and so far, things don’t look very different than they did before polls closed Tuesday night.

But some of the races that could be among the most consequential for the country’s direction have yet to be decided.

Lanhee Chen, the state controller candidate that some thought could be the first Republican to win statewide office in California in nearly two decades, was trailing his Democratic opponent Malia Cohen by double digits in early returns — raising questions about the GOP’s future in the state.

When it comes to ballot measures, three easily sailed to victory: Proposition 1, to enshrine the right to abortion and contraception in the state Constitution; Prop. 28, to require the state spend more money on arts and music education in public schools; and Prop. 31, to uphold a state law banning the sale of certain flavored tobacco products.

On the other hand, voters decisively rejected Props. 26 and 27, which would have legalized sports betting at Native American casinos and online, respectively; and shot down Prop. 29, the third effort in as many elections to increase regulation of kidney dialysis clinics.

Proposition 30, which would levy a new tax on millionaires to fund electric vehicle programs and hire more firefighters, also was defeated.

In brief remarks at a Sacramento victory party for Prop. 1 on Tuesday night, Newsom focused less on his gubernatorial win than on the significance of California voters overwhelmingly passing the abortion rights amendment — which he contrasted with policies in “red states” that exhibit “cruelty” and a “zest for demonization.”

But while the outcomes of many races seemed clear Tuesday night, some of the most heated — and expensive — state legislative and U.S. House contests were too close to call, and could remain that way for days or even weeks.

It also remains to be seen whether a Republican “red wave” will crash over California House races and if so, to what extent. Ultimately, which party ends up in control of Congress could conceivably be decided by races in the Golden State.