The Aptos Branch Library has been standing for more than 40 years. That’s about to change as the demolition phase of its reconsruction is set to begin. Completion of the new library is expected in the summer of 2023.


“Strange Weather,” an exhibition running through Aug. 14, marks a collaboration between the Museum of Art & History and UC Santa Cruz’s Institute of the Arts & Sciences.


Add yet another title to the “Filmed at the Boardwalk” list. STARZ film crews were in Santa Cruz filming scenes for the second season of “Blindspotting” at the Santa Cruz Beach Boardwalk.


The Museum of Art and History and Indexical combine forces to present a contemplative and provocative artistic experience at Santa Cruz’s historic Evergreen Cemetery.


Tim Eagan, creator of “Subconscious Comics” and a longtime Santa Cruzan, turns an injury from his youth into a meditation on fate and mortality.


Bob Gómez, who is serving as Watsonville’s first poet laureate for a two-year term, talks about his background and future plans for his tenure in the position.


As you walk through the UCSC campus, you hear a sudden stir in the dense forestry. You stop and think, “It’s probably just another deer.” But what if it was something stranger? Illustrator Jordan Moore lets his imagination run wild.


California playwright Josefina López talks about being honored at the Watsonville Film Festival—a commemoration of the 20-year anniversary of her play “Real Women Have Curves.”


Historic moments of local Indigenous resistance to colonization are highlighted in a new book by Martin Rizzo-Martinez, “We Are Not Animals: Indigenous Politics of Survival, Rebellion, and Reconstitution in Nineteenth-Century California.” The book includes a forward by Amah Mutsun Tribal Band Chairman Valentin Lopez.


KSQD launched at 90.7 FM in 2019, at a seemingly inauspicious time for radio. But the community-focused station has carved out a niche in Santa Cruz, Wallace Baine reports.


Jaime Cortez has published a paperback collection of stories that is garnering positive attention from NPR, the New York Times, and other media outlets.


For nearly four decades, the Santa Cruz hip hop scene has thrived. What once started as an underground movement has now flourished into something truly notable.


It’s taken about $80,000 of concrete work and hours of volunteer sweat equity, but finally the Scotts Valley Community Theater Guild is nearing completion of a performing arts center at the site of the old roller rink.


Every year the Santa Cruz County Arts Commission honors a local artist for achievements in performing, visual or literary arts, as well as contributions to overall cultural enrichment. For 2021, the county has named multimedia artist Guillermo “Yermo” Aranda as Artist of the Year.


Artists in Santa Cruz County are opening their doors for the annual Open Studios Art Tour, which runs three consecutive weekends. On view will be a wide variety of work: paintings, photographs, assemblage, prints, sculpture, textiles and jewelry.


In this week’s cover story, Good Times writer DNA profiles Santa Cruz’s Lara Love Hardin, who used writing and comedy to crawl from the depths of addiction into the bright light of literary fame.


The Found Art Collective celebrated its grand opening on Sept. 16, and the Scotts Valley community turned out to welcome this new addition to the city’s cultural scene.


When Amy Thomas, principal at Watsonville Charter School of the Arts, noticed that her students were a bit restless, she began searching for something new to engage them. Thomas reached out to artist Martina Goulart, who came on board for a mural project.


A new mural designed by Watsonville artist Francisco Alonso was unveiled at a ceremony that began with a blessing by the Pajaro Valley Ohlone Indian Council and included performances by Watsonville’s White Hawk Aztec Dancers, and a poetry reading.


When it looked like historic Henflings Tavern in Ben Lomond would shutter back in 2018, resident bartender Erin Miller and husband Josh saw an opportunity. And they’ve managed to keep the the iconic live music venue up and running.


Local and international artists will create a series of ocean-themed murals from the Westside to Capitola, each one addressing threats facing marine life from climate change.


Mexican Independence Day is Sept. 16, and the Watsonville Film Festival is teaming up with two other organizations for Celebrando La Cultura. Held Sept. 15-18, the four-day fiesta will include film, music and dance.


Ben Lomond native Jesse Daniel had a full tour planned when the pandemic hit. While on hiatus, he wrote and recorded the album “Beyond These Walls” with Jodi Lyford, his partner, bandmate, and co-owner of their independent label, Die True Records.


After 10 years of research and interviews, retired professor Traci Bliss has published “Big Basin Redwood Forest: California’s Oldest State Park,” a book that focuses on the efforts of women in the early 1900s to preserve the redwoods.


The Santa Cruz Symphony returns with its most ambitious season ever as music director Daniel Stewart signs a long-term extension. 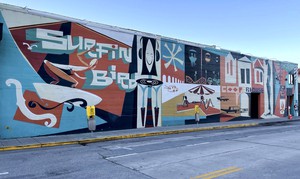